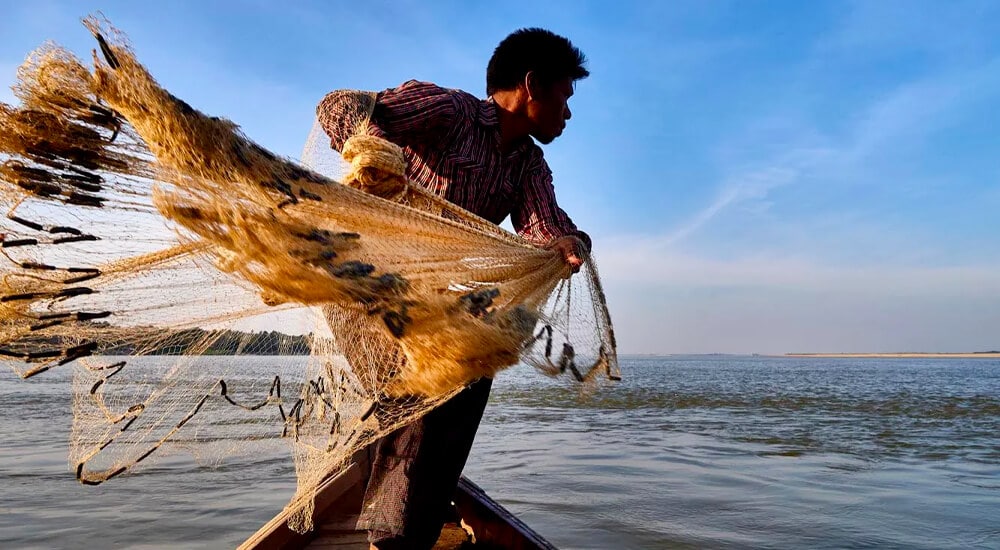 Did you know that fishermen and Irrawaddy dolphins make a great team? As it turns out, dolphins are highly effective wingmen, telling fishermen when to throw their nets, while simultaneously driving fish towards the fishing boats.

With this concept, they help fishermen use traditional fishing practices to boost community-based tourism, by taking travellers out on the water to watch dolphins while increasing their profits at the same time. It’s been an upstream battle, but the results speak for themselves.

“If local communities join forces with dolphins and travellers, they create a situation where everyone can have it all”

Over the past 60 years, the number of Irrawaddy dolphins in Myanmar has been halved, mainly because of entanglement in fishing nets and electric fishing. Fishermen use ever more drastic measures, which inevitably leads to more dolphin deaths. The biggest problem lies in the so-called gillnets; curtains that are hung in the river water and result in the unfortunate bycatch of the endangered Irrawaddy dolphins.

Then there’s an increase in boat traffic, mostly local boats but some tour boats, causing water to pollute and rivers to overcrowd. Many believe this is the price nature has to pay for the prosperity of its people, but Paul Eshoo dares to disagree. “It’s the other way around. If local communities join forces with dolphins and tourists, they create a situation where everyone can have it all.” 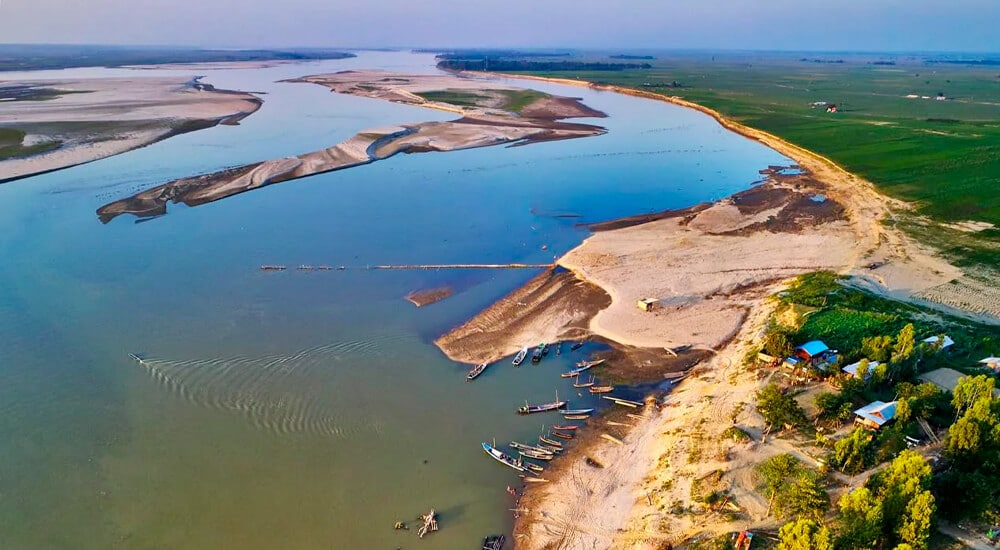 It’s this conviction that is the foundation of the Living Irrawaddy Dolphin Project. The members found out about an old tradition of fishermen collaborating with dolphins and started using it as a way to promote local-based tourism in the region. Paul: “No one knows how long they’ve been doing this, but somehow the dolphins and the fishermen have figured out a way to actually fish together.

“So, when we go see dolphins with tourists, we wait for the fishermen to ship out so we can follow them. The fishermen use throaty calls to attract the attention of the dolphins and get to work, while the tourist have a front-row seat without tour operators having to chase dolphins themselves. This way, the project reduces harming fishing practices, but also reduces the negative impact of too many boats on the river.”

“We anticipate the trend of exploration holidays and exclusiveness”

Protecting the Irrawaddy dolphin is not the only goal. “We not only reduce harming fishing practices; we organise tours that benefit fishermen and their families too.” In the past, tour operators would only contract one or two fishermen, leading to inequality and causing tourism to unevenly spread across the region. The Living Irrawaddy Dolphin Project therefore chooses to work with different communities so that the benefits do get spread to more families and villages.

“It makes the tours more interesting too. Dolphins move around, and thanks to our collaboration with different communities, we can go where they go. Plus, by working together with different families, tourists get the chance to meet more local people and visit places that aren’t known by the great public. With this approach, we anticipate the trend of exploration holidays and exclusiveness. And the great thing is, it really works for all parties involved.” 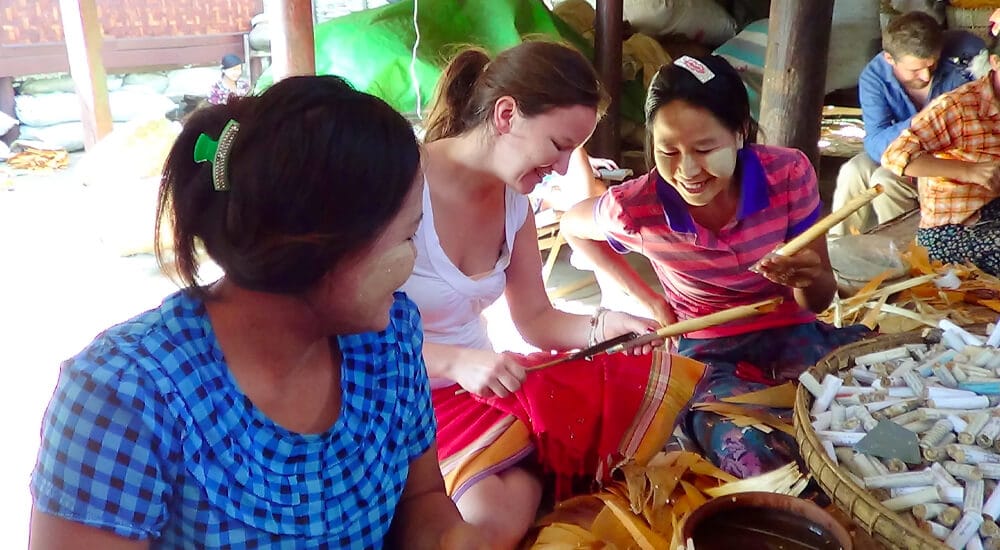 Moreover, there are plenty of ways to increase community-based tourism, meaning there’s enough for everyone. Paul: “We do all sorts of things to show tourists what it’s like to live in this region. For example, we go to this village where they make handcrafted bamboo hats. We have the locals show tourists how they make them and give them a tour through the village. It’s this combination of activities that makes our tours so interesting. Plus, it keeps the pressure off the dolphins.”

“This kind of interaction is powerful, it’s a non-monetary part of tourism that’s pretty cool”

To expand the Living Irrawaddy Dolphin Project, there are two obstacles that need to be overcome. First, there are not enough hands to set up independent projects and second, both locals and tourists don’t always know how to contribute.

Paul is planning on tackling both problems by focusing on education and awareness. “We need to teach local communities on how to set up their own projects, while reducing environmental impact. At the same time, we need to show tourists the benefits the project has on the people and animals involved. This way, we’ll make the locals more self-sufficient while generating a wider audience.” 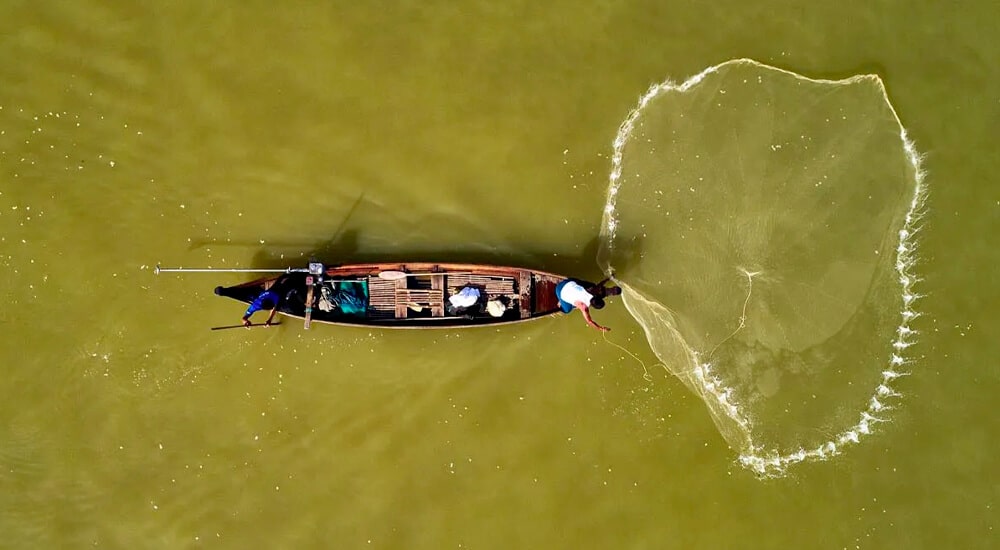 Fortunately, so far both tourists and locals have been very supportive. “During one of our first tours of the season, one of our clients told me that they went out to see dolphins, and a group of young children from the village was able to also see the dolphins near their village really close, making a real connection there. This kind of interaction is powerful, it’s a non-monetary part of tourism that’s pretty cool.”

It’s stories like these that will inspire more fishermen to go back to their roots and use traditional fishing techniques, while attracting more tourists that book a tour with the right intentions. This project is an inspiring community-based tourism best practice. Developed in a way it creates win-win-situations for all parties involved. From the dolphins and the environment to the local communities and travellers.

Be featured in our library

Present your good practice and help others become better tour operators too. Learning from the past and from others increases the chances of success in the future.

Be updated on our new library additions to help you become a better tour operator.

Thank you for downloading our eBook!

Complete the form below to subscribe to our library updates. On subscribing you'll also receive our free eBook.

Thank you for subscribing!

Take the first step to become a better tour operator.

You have Successfully Subscribed!